(Note: I will be posting all parts of my senior thesis. It is a collaboration of my learning for my entire college career. I really just want to post it so that people will know what I have accomplished. Thankfully for you I will post it all in different increments.)

The German Expressionist film era in Weimar Germany existed from 1919-1927 as both an artistic film development and a reflection of the psychological condition of the country’s people. This movement manifested itself in the creation and reception of reputable movies including Robert Wiene’s The Cabinet of Dr. Caligari (1920), F.W. Murnau’s Nosferatu (1922), Paul Leni’s Waxworks (1924) and Fritz Lang’s Metropolis (1927). They incorporated dark, surreal themes embellished through light manipulation, stylized sets and backgrounds, embellished acting methods, and innovative camera techniques. These directors and others in the German studios used these tools to unmask the inner workings of the human soul and understand the true meaning behind the seemingly impenetrable mystery of reality. Whether it was early silent horror films like Rupert Julian’s The Phantom of the Opera (1925) or silent thrillers like Alfred Hitcock’s The Lodger: A Story of the London Fog (1926) and his subsequent films, German Expressionist films’ influence on worldwide cinema was far-reaching, immortalized long after its short era had ended. 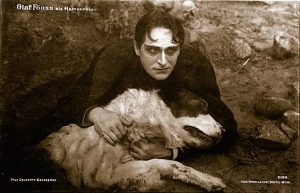 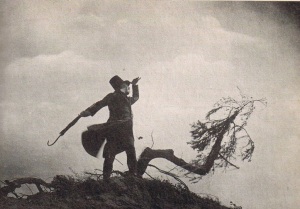 Though German films like Paul Wegener’s The Student of Prague (1913) and Otto Rippert’s six piece serial Homunculus (1916) already incorporated Expressionist themes, circumstances would not favor German Expressionist film until the end of The Great War. The detrimental effects of The Great War essentially pushed this movement into existence. Its imperial dreams crushed and national pride lost, Germany, which stood at the height of industrial and military power, was defeated at the end of 1918 and forced to take full responsibility for the war. The Treaty of Versailles’ conditions for Germany, which included massive war reparations of 132 billion gold marks (US$33 billion), a command for the German military to disarm, and multiple territory concessions fostered terrible economic problems, like hyperinflation in 1923. Historian and film critic Lotte E. Eisner observed “the German mind had difficulty in adjusting itself to the collapse of the imperial dream; and in the early years of its short life the Weimar Republic had the troublesome task of meeting outside demands (Versailles). . . while at the same time maintain equilibrium internally”.[1]

World War I, as historian Edmond Taylor observed “killed fewer victims than the Second World War, destroyed fewer buildings, and uprooted millions instead of tens of millions, but in many ways it left even deeper scars both on the mind and on the map of Europe”.[2] In addition, in the film Judgment At Nuremeburg (1961), one of the defendants Ernst Yanning surmised, “There was a fever over the land. A fever of disgrace, of indignity, of hunger. We had a democracy, yes, but it was torn by elements within. Above all, there was fear. Fear of today, fear of tomorrow, fear of our neighbors, and fear of ourselves.”[3] His statement, though spoken at the end of World War II, embodies the overwhelming feeling of despair that seemed to permeate Germanys’ people. These undeniable scars and psychological problems manifested themselves in the arts, especially in film.

[1] Eisner, Lotte H.. The haunted screen; expressionism in the German cinema and the influence of Max Reinhardt. Berkeley: University of California Press, 1969, 9. 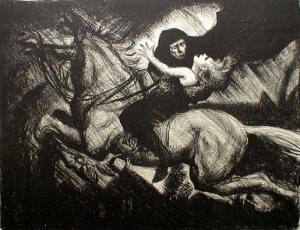 Pulsing, deep questions on human moral and the mind grew from the melancholy environment of Interwar Germany, calling for solutions and explanations for the suffering brought by the First World War. Through the arts, more specifically Expressionism, the Germans released bottled up emotions and memories caused by the war at its aftermath. Their attraction to darker, supernatural themes culminated in the obscure and undetermined nature of Expressionism and its love of ghosts, visions, dreams and the mystical nature of the mind and spirit. Eisner explained it thus:

“Mysticism and magic, the dark forces to which Germans have always been more than willing to commit themselves, had flourished in the face of death on the battlefield. The hecatombs of young men fallen in the flower of their youth seemed to nourish the grim nostalgia of the survivors. And the ghosts which had haunted the German Romantics revived, like the shades of Hades after draughts of blood.”[1]

Harkening to the dark nature of the Romantic era characterized by pieces like Franz Schubert’s Lied, “Erlkönig” (The Earl King) and enhanced by the grim atmosphere wrought by the War, the German artists turned to Grübelei, “the eternal attraction towards all that is obscure and undetermined. . .culminated in the apocalyptic doctrine of Expressionism”, that wove its way inevitably through film.[2]

Germany’s isolation during the Great War also contributed to the rise of its Expressionist Film era. By 1916, it stopped exporting German films and importing foreign films from France, America and Italy. Eventually, partly to counter anti-German propaganda, the German government created the major German film company the Universum Film AG (UFA) in 1917 to both satisfy the country’s universal desire for films and “promote pro-war films”.[1] Initially, the UFA created three different film types, adventures and spy movies, educational films on sexuality and copied pre-war Italian historical epics, and established itself fairly well as a legitimate film studio with “superb technicians and (some of the) best-equipped studios in Europe”.[2] It was not however through the UFA that Germany finally had a threshold in the world of cinema, but rather a smaller company entangled with German theater. 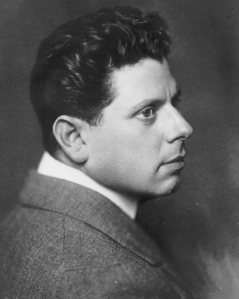 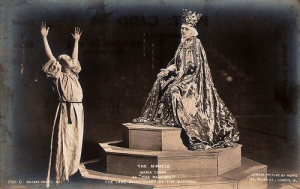 The famous theater director Max Reinhardt managed the Deutsches Theater in Berlin from 1905-1930 where he implemented Expressionist themes onto the stage. Truly passionate about his work, Reinhardt worked to establish an authentically artistic, quality theater. By 1906, he made his intimate theater, or kammerspiele ,“with dim lights and warm-toned wood paneling, in which an elite. . . could eel all the significance of a smile, a hesitation, or an eloquent silence” with eloquent mastery.[3] Famous actors like Conrad Veidt, Werner Krauss, Emil Jannings and multiple others, future esteemed American actors, first professionally acted as part of Reinhardt’s theatre troupe.

The German cinema and theater remained closely linked since the beginning of the film era through its actors, technicians, and set designers. These connections resulted into a unique type of film studio Filmwelt, “an off-shoot of the theatrical establishment, a concept foreign to non-Germans” especially American studios, whose theater and cinema stayed separated by nearly 3000 miles.[4] Between its directors and collaborators there existed little competition, hardly any professional jealousy and group effort was a set rule in the production of each film. Eisner observed, “One of the secrets of the success of the classical German film was the perfect technical harmony achieved by long Regiesitzungen”, two month long group discussions on films in production “which the director invited everybody due to work on the film, from the chief designer and chief cameraman to the workmen in charge of the lighting.”[5] 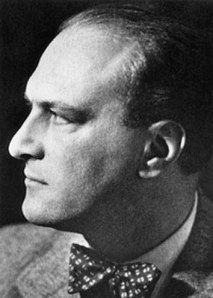 Through Decla-Bioscop managed by Erich Pommer, future director of the UFA from 1924-1926, Germany’s Filmwelt fully blossomed, its personnel inbred and interchangeable almost like a complicated, synchronized web. In 1919, Pommer took a gamble and decided to bring to life the unconventional vision of writers Carl Mayer and Hans Janowitz in the production of the inexpensive, experimental story The Cabinet of Caligari. Caligari “created a sensation in America, France, and other countries. . . (and) a stylistic movement in cinema that lasted several years”.[1] In time, German Expressionist films would fulfill the desires of directors and film producers to promote marketable artistic films; nonetheless, given Germany’s economic circumstances and psychological state, they unsurprisingly depicted the existential threat to German civilization.